Morozov and Minakov have four gold for two. But how were they allowed to perform?

In recent months, the Russians have been excluded from most international competitions. Starting with national team tournaments, sports authorities have also reached out to individual competitions. Swimming competitions were no exception to the rule: it seemed our swimmers were not expected anywhere this season.

However, Russian athletes still found a way to become known on the world stage. Moreover, they got the right to speak not everywhere but in the US.

Two talented swimmers recalled the strength of the Russian school and won several top prizes in the tournament. Today this gold is more important than ever!

The most important awards for Russia at the starts in America were won by Andrey Minakov and Vladimir Morozov. The swimmers took part in the annual Speedo Grand Challenge, held May 27-29 in Irvine, California, and won a total of five medals.

Andrei Minakov proved to be the most impressive in the tournament, winning the gold medal in three distances at once: 100 m freestyle, 100 m butterfly and 200 m freestyle, and also took third place in the 50 m freestyle swimming. 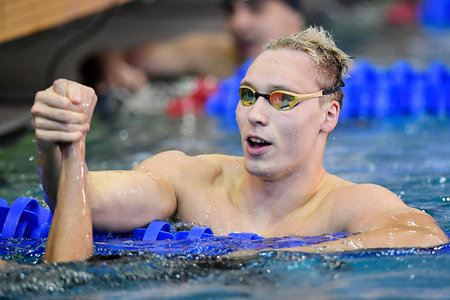 However, the athlete’s success in California was to be expected: the 20-year-old Russian was already among the strongest swimmers not only in his own country but also in the world. Andrey already has several awards from the World and European Championships, and at the last Olympic Games in Tokyo, the athlete stopped just one step away from the coveted medal, finishing fourth in the crown distance (100 m butterfly).

Another award for Russia was won by Olympic medalist Vladimir Morozov, an even more experienced and titled athlete. The 29-year-old swimmer won the gold medal in the 50m freestyle, where he once won the silver medal of the European Championship (Barcelona-2013) and the gold medal of the Universiade (Kazan-2013).

The two athletes, by the way, are directly related not only to Russia but also to the United States. Minakov, for example, is now a student at Stanford University – and is generally considered one of the smartest Russian athletes of his generation. His colleague Morozov has been living and training in America for many years, so it was not difficult for them to reach the tournament in California, unlike their teammates.

The right to participate in the Speedo Grand Challenge was reserved by Russian swimmers even after the imposition of sanctions by the International Swimming Federation (FINA). The fact is that this ban applies only to competitions that take place under the auspices of the organization, among which the final tournament does not apply.

Unfortunately, neither Morozov nor Minakov will be able to penetrate the next Aquatics World Championship, which will be held from June 18 to July 3 in Budapest.